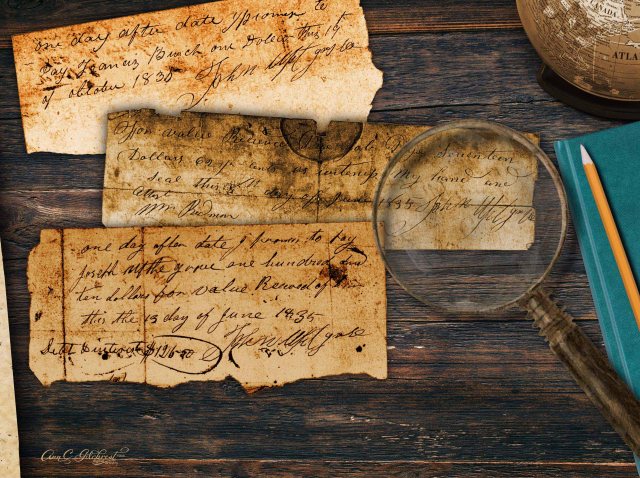 John Uptegrove was born about 1794 probably in North Carolina. When I first met him his name was John William Uptegrove. Not long after that first meeting I discovered another author who called him William Uptegrove. Years later I discovered his original signature in Kentucky court records. He signed his name as John Uptegrove. Just John, no middle name or initial. I was left wondering where did the name variations originate and did John even have a middle name?1

WHERE DID THE NAME JOHN WILLIAM UPTEGROVE ORIGINATE?

It was in 1988 when I first met John shortly after I discovered genealogy. I was given a copy of a family history The Uptegrove Family Book.2 According to this history my 4th great grandfather was “John William Uptegrove.” As with many family histories sources were not included. (To be honest at that time I didn’t even know sources and citations mattered or that I needed to evaluate and analyse what sources and information I did have.) The author did include copies of several Memorandums by John Henry Uptegrove written in the mid to late 1970’s. They were the basis for The Uptegrove Family Book.

An excerpt from John Henry’s memorandum dated 1 May 1977 contains the following explanation for the name John William Uptegrove.

“I am convinced that the name of the man that came out of Virginia was not William, but John. Several recorded deeds, copies of which I have in my file, verifies everyone referred to him as John, never William. Leaving me to believe that his name was John William Uptegrove, being referred to as William by his friends and family, but in all recorded information always referred to as John. If I were writing a final report, I would not hesitate to refer to him as John Uptegrove and possibly John William Uptegrove. This substantiated partly by the fact that my own father was John William, no doubt being named for his grandfather. Although I have no concrete evidence that he was so named.”4

John was born about 17946 when the use of middle names was not customary. John William Uptegrove born 18587 was born when middle names were the custom.8

John died between 19 October 18359 and 15 February 1836.10 His youngest child James was born 20 March 1833.11 He was 2 years old when his father died. He would not have had any firsthand knowledge of his father. Anything he knew about John could have only come from family and friends opening the door for errors, misinterpretations and fallible memories. The John William who was purported to be named for his grandfather was James’ son.

WHERE DID THE NAME WILLIAM UPTEGROVE ORIGINATE?

A tale of how the first Uptegrove’s arrived in Kentucky has been recounted in the History of LaRue County, Kentucky: Birthplace of Abraham Lincoln. Published in 1967 the book was written ten years before John Henry’s Memorandum and is the most likely origin of the name William, John Henry refers to in is Memorandum. This history asserts that John’s name was William. There is no mention of the name John associated with the name William in the entry about the Uptegrove family.

“Mr. Ferrill told his daughters of the first Uptegrove’s who came from Virginia, William and Elizabeth (Bill and Betsy) —”

The identity of Mr. Ferrill is not specifically given. However, the previous story in the book is attributed to Mrs. E. S. Ferrill who was undoubtedly the wife of Edward Stanton Ferrill.  Mrs. Ferrill was Martha Susan (Druien) Ferrill, the younger sister of Isabella (Druien) Uptegrove wife of John William Uptegrove. The story Mrs. Ferrill told was about her sister Isabella’s wedding to John William. The end of the article about the first Uptegrove’s who came to Kentucky states that the information was provided by a “daughter of the late John and Isabelle Uptegrove.”12

William Ferrill was born in 1795 and died 4 November 1871.13 He was a contemporary of John Uptegrove 1794. Two of William’s children, Joel and Mary Elizabeth married two of John’s children, Mahala and James.

I may never know which Mr. Ferrill told the story of how the Uptegrove’s arrived in Kentucky but it is clear that the Ferrill’s & Uptegrove’s where allied.

The History of LaRue County continues with the following:

There are several problems with this part of the above story in addition to John being called William.

When John Uptegrove died he left at least five infant children under the age of 14, not four and two other children who were over the age of 14. John’s oldest son Joseph took over the guardianship of his younger siblings in September 1838.25

This proceeding indicates that Joseph had turned 21 prior to September 1838 when he became the guardian for his “infant” siblings, Mary, Mahala, William, George & James. Joseph would have been about 19 when his father died.

Shortly after William and Sarah married they removed to Arkansas. William died in Arkansas in August 1852. A petition was filed in the LaRue Circuit court on 27 September 1870 on behalf of William’s widow Sarah.33 Sarah states that she and William had two children Priscilla and John James. She further states that John James died after his father in 1853.  Based on the testimony of Sarah, William did not have a son Jeff/ Jefferson. However John’s son Joseph who married Nancy Smith34 did have a son Samuel Jefferson Uptegrove who at different times used the name Jeff or Jefferson.35

Mary’s second husband was to Silas Smith who was the son of John Smith and his wife Margaret Angle36 and not the Sam P Smith family.

As stated earlier the Uptegrove “stories” were provided by a daughter of John William and Isabel (Druien) Uptegrove.37 When the stories were published in 1967 two of John and Isabel’s daughters were still living Nellie who was born in 189638 and Margaret who was born in 1898.39 It is unknown which daughter provided the information but both daughters were about 70 years old in 1967. Nellie and Margaret were born a quarter of century after their grandfather James Uptegrove had died40 James’ wife died41  when they were about 16–18 years old. None of James’ siblings were living when Nellie and Margaret were born. There wasn’t anyone alive who had firsthand knowledge of their Great-grandfather John.

After exploring the original records it is apparent that by the time the Uptegrove’s story arrived in 1967 and was published it had been passed down through a number of people. Bits and pieces were lost or rearranged much like what happens when you play the Telephone Game.

MY NAME IS JOHN UPTEGROVE

Four Kentucky counties were searched for original records, Lincoln, Nelson, Hardin and LaRue Counties. Lincoln County is the first place John appears in any original record. Nelson and Hardin Counties are where John owned land and/or payed taxes. The land he purchased in Hardin County became part of LaRue County after John’s death. There are a number of court records in LaRue County in which John is recorded.

To date the only census record John appears in is the 1830 census for Nelson County where he is listed at John Uptigrove.43 He died before the 1840 census. According to the tax lists he should have been in the 1820 census in Nelson County but he is not found in the surviving census records. In 1810 he was not old enough to be enumerated on his own.

Examples of John’s original signature can be found in his estate settlement papers.45

Three receipts, no’s 9, 13 & 14 contain original signatures and are in the digital image at the beginning of this article. Transcriptions follow:

Receipt no. 14: One day after date I promised to pay Joseph Upthegrove one hundred and ten dollars for value received this 13 day of June 1835      John Upt grove

Perhaps the most telling are the lawsuits46 that began after John’s death in the LaRue County Circuit Court. These lawsuits contain numerous depositions given by family and friends. John is never referred to as John William or William he is always referred to as John. One example can be found in the testimony of John’s brother Joseph. Joseph states, “…until after the death of my brother John.”47

© Ann C Gilchrest and Renaissance Ann, 2018. Unauthorized use and/or duplication of this material without express and written permission from this site’s author and/or owner is strictly prohibited. Excerpts and links may be used, provided that full and clear credit is given to Ann C Gilchrest and Renaissance Ann with appropriate and specific direction to the original content.

Digital images on this blog have been created using Photoshop. Original photographs & digital scans have been used. Other content used to create the images has been purchased from various companies. Including  but not limited to: